Hello, and welcome to the second issue of the KDE Brainstorm Digest! This issue comes in slightly late, due to some real time commitments, but I couldn’t leave you without it, could I?

Currently, 181 valid ideas have been submitted in this period, with an average of 6 ideas per day. Adding up to that, we have just 3 invalid ideas and 8 non-idea posts. This means that our user base is quickly getting used to the Brainstorm workflow. Eight proposed ideas were already implemented, and 7 new ideas were submitted to the developers for consideration. One idea was rejected.

This month we don’t see many ideas implemented: in fact, we have no ideas that have been marked as “Done”. This is not because the developers aren’t willing to listen, but because KDE 4.3 Beta 1 was released, and that means that KDE is now on feature freeze. Developers are now focusing on fixing bugs, rather than adding features, so it is very likely that ideas will be screened more regularly around the release of KDE 4.3 RC 1, that is when SVN trunk will be “unfrozen” and feature commits will be allowed again.

This month’s top voted idea (not counting negative votes) is “Make videodvd support like audiocd”, with a net result of 25 votes. In this idea, Brainstorm regular poster (and now Brainstorm Moderator!) TheBlackCat proposes the creation of a KIO slave for DVDs, like audiocd:/. Like this, a user could technically rip DVDs by drag and dropping from the DVD to any other location (kind of like what audiocd:/ does). There haven’t been many replies, but the reaction has been overwhelming positive. Personally, there is the issue regarding DMCA-like laws and CSS, but it could be a nice feature to have.

The most discussed idea for this month was “Let’s use Gtk2 theme in KDE (Additional Option)”. In this post, Mazur proposes, in order to make GTK+ 2 applications look better in KDE, to have an option in System Settings to load and use the installed GTK+ 2 themes. This has sparked a lengthy discussion (23 replies) and also caused qute an intense debate, up to the point of earning also the title of most controversial idea for this month. So far, the proposal stays at -4 votes, but, as KDE Developer Ivan noticed, it may also be due to the wording of the forum thread.

The idea with most votes (including negative ones) is “[Dolphin] Preload an instance after KDE startup”. Forum user joethefox suggests a feature like Konqueror’s preloading option (in KDE since the later 3.x releases), but applied to Dolphin instead, in order to minimize startup times. Most comments have been positive, and currently, negative votes are much less than positive votes. The idea’s overall score is of 24 votes.

This month’s top idea poster is still TheBlackCat, who again posted an incredible number of proposals (even well detailed). Will he keep his role as the idea champion? We’ll find out next month!

Status of the project

It’s been two months since the KDE Brainstorm has launched. How it is going now? This month we have not one, but two graphs to describe the posting of ideas in relation to time. 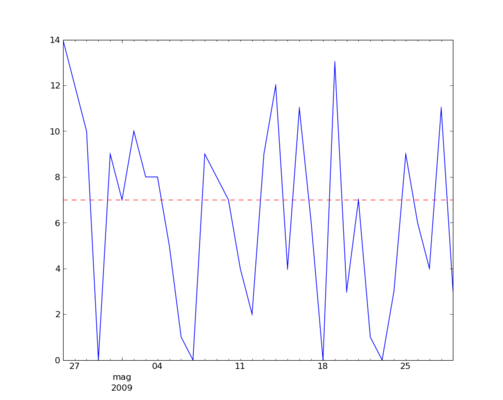 This is, as usual, the plot of the ideas posted per day. As you can see, the number change rather drastically, and the median (a little better than the mean in such irregular data) is around 7 ideas/day. With respect to the past month, the number of ideas posted per day are less, but again, we have to consider the launch of the project, which undoubtedly skewed the results, due to the large input of ideas in the first days.

Still, it’s not like we can gather meaningful insights from a plot like this. So, thanks to the aid of fellow forum staff Hans (Mogger on IRC), we have the second graph for this Digest: 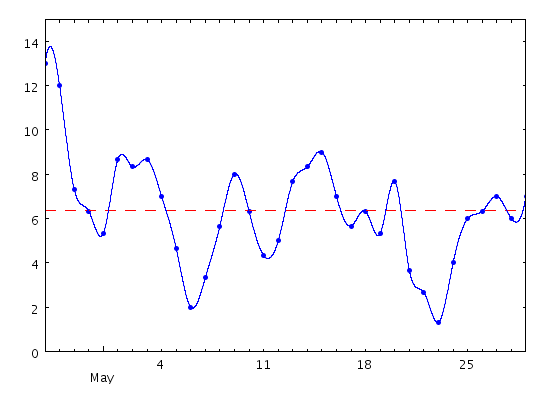 This is a sliding average calculated with a window of 3 days. As you can see, we can gather better information from there. Save two periods of the month (the two negative peaks in the plot) most of the ideas were close to the mean number of votes (the dashed line is the mean of the average number of votes). Although less than the last month, we can say that the project is alive and kicking. Again, the feature freeze in KDE may also explain the decrease in the number of posted ideas: we’ll see with next month’s trends.

Did you like this digest? You didn’t? Let us know so we can improve it!