Sometimes Christmas presents are really unexpected, and today I found out I was given one such gift: the limited edition of _THE IDOLM@STER 2, _PS3 version. It was quite a bulky box, showing all the main characters from the game (and from the recently-ended anime) (click to enlarge): 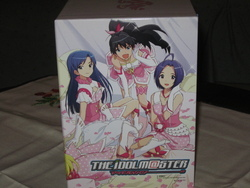 Of course, having such a box means that there’s a lot of stuff inside. In fact, once opened, there are two game BDs (one being the actual game, the second being the first volume of Gravure for you! starring Haruka), a soundtrack (no songs, though), a booklet, a number of postcards (mine were showing Iori’s ending from episode 2 of the TV series), a booklet and also the first BD of the anime version:

It turns out the BD is also one of the limited editions, with a nice cover and more goodies, including a small booklet and a CD with the songs heard in the episodes: 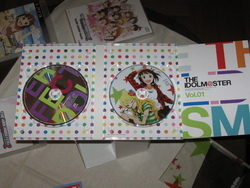 And here are the postcards: 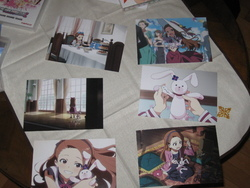 What about the game itself? Well, I have played it only briefly so far: I know it will be a bit painful to translate since the text is timed (having it stop, like in Neptume mk.2 is quite handy if you don’t catch something at first) and well, kind of different than the games I played so far. Still, in my opinion the various characters make it a worthwhile challenge.