KDE SC 4.4 Beta 1 has been released, and of course I couldn’t stay still. Thanks to the friendly openSUSE Build Service, there were packages available, so I just pointed my zypper sources to KDE:KDE4:UNSTABLE:Desktop repository, adjusted a few other things (mainly other third-party repositories) and updated.

It was a mostly painless process, mostly because I was too fast, and the mirrors hadn’t synced yet, so I ended up with 4.3.77 packages instead of 4.3.80 (Beta 1). I just avoided to log into X and waited till the right packages were available, then I updated again. I updated system-wide (yes, I can be that crazy) and I started using the beta (and its subsequent snapshots) full time. In part it’s because I’m a feature addict, in part because I wanted to write some promo material (I’m really sorry Jos, I didn’t find the time to do it yet!) to make things easier prior to release.

So, how’s the SC faring, so far? Pretty nice, overall. There are of course quirks (for example KWin not responding to global shortcuts unless it’s restarted), but generally the experience has been quite positive. The user-facing components, such as KWin and Plasma, have improved quite a bit (new effects, the new widget explorer, new applets….), but also less visible parts such as Nepomuk (with the Virtuoso backend it works OK, although for some reason I can’t access the metadata panel in Dolphin or use the search, also in Dolphin). I also took the time to explore other applications, for example Cantor, as I’m a (reluctant) user of the R programming language. The version built by openSUSE doesn’t ship with an R backend, so I had to compile it on my own. It is more minimalistic than, say, rkward, but I can foresse already some uses for it (especially running already-made scripts).

I also tried out the netbook shell on my Eee. Again, it’s pretty nice, although sometimes the performance is still lacking (but my Eee uses an i915 chipset, so it’s really the end-of-line and may have played a role in this.

Overall I’m very impressed, so congratulations to everyone who’s making this possible!

Lastly, following up what Stuart and others did, here are two screenshots of two of my (many) activities (click for full picture): 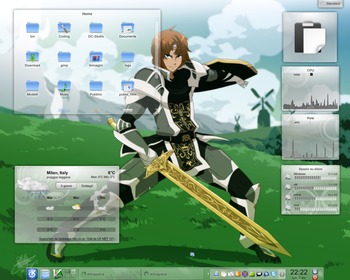 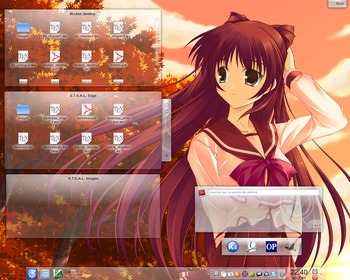 « After a hiatus, Klassrooms continue!
Archive
Danbooru Client 0.5 is out »