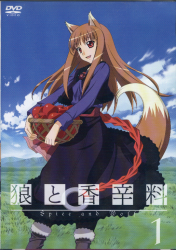 A rather large number of days ago I got the first DVD of Ookami to koshinryo, better known as Spice and Wolf, which I when the first episode was released. I got the limited edition, which came in with a number of extra features (which still don’t justify its ~ ¥6800 price tag, though). The main one is the inclusion of a 300 piece puzzle, illustrated by the artist who works on the original novels.

I still haven’t tackled this, and given my recent time constraints I expect this to stay in unassembled form for a long time. Aside this, in the box there are two cardboard illustrations (card game sized), which also appear in the ending sequence, a small booklet with some _settei _(character designs), world and character information, and some small promotional leaflets.

The DVD contains three episodes (sadly just for this first volumes, another reminder that the Japanese DVD releases aren’t really good value for their money), and presents, in my opinion, sub-par presentation, as the menu clearly shows. There are no sub-menus, everything is presented on a static page with links directly to the content (episode chapters) and the only extra feature of this release: the credits-less opening sequence.

Quality-wise, there are no obvious improvements, actually the most picky people will probably notice less quality than on the DVD (due to the fact that the original broadcasting was in HD format, and the DVD is SD). I noticed some color saturation issues on Windows (with PowerDVD), but none of the sort on Linux (kaffeine). At least the original 16:9 aspect ratio is there (one never knows…).

Aside that, content-wise the same points I made while viewing the first episode still apply: it’s a highly atypical yet interesting series. Despite the lack of “action”, all the episodes are intriguing and the “economics” element adds a nice touch. Of course it’s not your typical series, so some may find it boring, but I really recommend it (although I’m fairly sure, like with other interesting series like , that it will go mostly ignored…)