Straight out of my anime backlog, I watched the first episode of Clannad. I don’t know much about the original name (save for the time it took to be released), but I knew that the animation studio who did this series was Kyoto Animation (The Melancholy of Haruhi Suzumiya, Air, Kanon and Lucky Star).

The episode starts off with the main character, Tomoya Okazaki, walking on the street off to school. He doesn’t seem to be a bright and cheerful fellow, as he expresses his hate towards the town he lives in. He then stumbles upon a girl (later we’ll learn her name is Nagisa Furukawa) standing on the stairs that go up a hill. The two have a short conversation, where he seemingly encourages her (a little odd, since his earlier thoughts), then the opening theme kicks in.

Later we see Tomoya going to school and having a talk with his (not so sane) roommate, and again bitter thoughts keep on crawling in his mind. The following day he is in class, and is approached by the class representative (see picture) who tries to lecture him about his attitude but no avail. The girl is taken aback by that (she looks like a shy type) until her sister (almost identical, she has longer hair) takes her defense.

Cue to lunch break, where again Tomoya meets Nagisa, who is acting somewhat uncomfortable because all the people she knew have moved on, as she was abroad/away and was forced to repeat the year. Tomoya suggests she does something interesting, and mentions a theatre club. While they discuss, a ruckus starts due to people from other schools going in and causing trouble. Tomoya wants to teach them a lesson but yet another girl appears and beats them up. Later, Tomoya’s friend tries to challenge her but gets beaten up as well.

It’s late afternoon, and Tomoya finds Nagisa in front of the so-called theatre club. Once she gets in, she is rather disappointed in seeing no one around. Tomoya explains that the club has been closed for some time, but in the end she might be able to resurrect it if people want to participate. 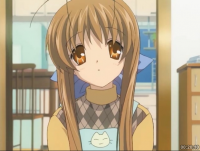 Tomoya is then heading home but remembers that Nagisa had told him about where she lives, a bread shop. As he’s on the way, he gets inside and tastes a “leftover”, a somewhat original piece of bread which is not particularly good. Tomoya makes the mistake of stating his disappointment. The person at the counter (Nagisa’s mother) starts crying while his father is out to get revenge. It takes time and Nagisa’s intervention to clear things up.

In the end, Tomoya  stays for dinner, and the others seem to develop a liking for him. When he gets home, he finds his father drunk, a sight that apparently is normal. Frustrated, he runs out of the house, and ends up again near Nagisa’s. There he finds her reciting under a streetlight, and that’s how the episode ends.

For being a sentimental anime, it is not that bad, as the narration avoids being too romantic or dramatic. There are also frenquent scenes that warrant a smile or two. Animation-wise it’s very  nice, but Kyoto Animation has a good reputation for that. Story-wise, we have just started, but it’s fun to watch. There are odd flasbacks about a person living alone in the world, so I expect (like in Air, _or _Kanon) the presence of something supernatural.